I recently returned home to Northern Michigan after spending six months in Eastern Europe getting to know the land that spawned my family.  I wasn’t sure what I was in for, and since I didn’t have a whole lot of information about my human ancestors I decided just to spend some time connecting with the land itself and the plants that grew there. I figured the best way to make this possible was through WWOOFing (World Wide Opportunities On Organic Farms, http://www.wwoof.net), a network well known among travelers such as myself. After a wild jaunt through the lower Balkans and a little bit of intuition driven internet searching, I finally found myself in the part of the former Yugoslavia that made my blood tingle: Northern Croatia,  just a stone’s throw from the Slovenian border.

I chose this particular farmette, Emerald Gardens, based on its proximity to the two villages my great grandparents had come from. I was in a state of awe from the moment we started rolling up the driveway in the van. It looked exactly like my driveway back home! Wooded, uphill, winding, green, full of potholes….it’s a match! The first familiar plant I noticed was the St. John’s Wort (Hypericum perforadum) or Cantarion as the Croats call it. They love this plant. All Croatian people know it and most of them use it. Collecting the little yellow flowers for oil is almost as common an activity as smoking cigarettes in these parts. They use it for nerve pain and sunburns, but the concept of taking it to treat depression was unheard of to these folks. In the states in recent years, SJW has gained a lot of recognition for this purpose and has even become a “fad herb”, one that is known by much of the general public, can be found at Walmart and the likes, and is often misused and abused. Back home in Michigan, I often notice the first open bud on or very near the Summer Solstice. To me this is an indicator of how this cheery yellow friend ‘lets the sunshine in’ to our lives at the exact opposite time of year when we need it most. In Croatia however, they get much more light and warmth even though we are on the same latitude (I live on the 45th parallel, and I learned that my ancestors did too!)

One member of my plant family that seemed to watch over me wherever I went on this land was Elder (Sambucus spp), which seemed all too fitting to me! These beautiful grandmotherly shrubs were all in blossom when I arrived there (early June) and their lacy white flower clusters turned into small, hard unripe berries before my very eyes. Unfortunately I had to leave before they and the figs reached full purple ripeness. Sad story. Guess I have to go back….

Much more low to the ground but equally abundant was the glorious purple third eye opener known as Clary Sage (Salvia sclarea). I had grown this plant in my garden a few times but never had I ever seen her as a wild weed. In her element she is much more vibrant and a deeper purple. In the early mornings l would climb my favorite little green hill and sit with this dear ally of mine. One day as I sat with my eyes closed, visions of my ancestors flowed through the middle of my forehead and seemed to nudge me just to let me know that I had come to the right place and they were with me.

Wild Rose (Rosa spp), Yarrow (Achilleum millefolum), Plantain (Plantago spp) Self Heal (Prunella vulgaris), Red Clover (Trifolium pratense), Yellow Dock (Rumex crispus), Dandelion (Taraxacum officinale), Nettles (Urtica dioca),Walnut Tree (Juglans spp–and the leaf is another medicine favored by the Croats), wild strawberries, mulberries, figs, and a strange but beautiful species of Schrophularia that I was never able to properly identify (at least not in English or Latin!) all also became more dear to my heart than ever before as I recognized them as not only allies but also relatives.

There is one plant, however, with whom my relationship stands out completely from the rest. Never had I ever even heard of this plant until the Spring of 2012 when I did an internship at Herb Pharm. I knew this plant was my ally the first time I stepped near her, long before I even saw her in bloom or knew anything about her. As I got to know her, my life began to transform. A few months later I was browsing through some jars of bulk herbs at a food co-op and happened to notice on the labels that many of these common herbs were outsourced from Croatia even though growing them stateside requires little to no effort. I think this was the moment when I became truly interested in visiting Croatia even more so than my other ancestral lands. About a month after this discovery I visited Michigan, now my beloved home. Before that I was pretty much nomadic. I grew up in Wisconsin and was looking for a place to settle and start an herb garden near the Great Lakes. Julie, my dear friend and fellow gnome whom I met at Herb Pharm instigated this visit. Together we followed some clues that led us to the home of a lovely elder in our community who happened to have an old, nearly abandoned herb garden on her property. She told us she would be beyond happy to have us come revive this magical round plot, and that the only thing still growing here was….Wood Betony, or Stachys officinalis. I was not surprised, but still in awe. For two years I tended to this lovely patch of earth, and suddenly my opportunity came to finally go back to the land of my family’s roots.

I didn’t find Wood Betony right away when I arrived, nor at all during the first week. I wasn’t looking, and I was so enthralled with every other plant, person, and moment at Emerald Gardens that I didn’t even remember the jar at the co-op or what prompted my desire to visit this country in the first place. Then one day as I was planting Rastika (a delicious green similar to collards that is possibly native to Croatia), I was down on the ground and a familiar leaf came into view. It was HER! I felt as if I were reuniting with my great grandmother herself and healing any negativity that had ever plagued our family. I watched her blossom and bloom over the next few days and knew my mission was accomplished. I also discovered giant patches of Betony growing all over the land and in the surrounding forests and meadows. Until this time, I had never seen this plant in the wild, not anywhere!

This piece of land was so very healing to me. I did not put shoes on or get into a car or leave this forest for three weeks, and when I did leave my ride was quite serendipitous. The neighbor of this farm is a Croatian Canadian who lives there part of the year, and the rest of the year he lives in a part of Canada that borders Michigan! Like me, he has relatives in Metlika, Slovenia…the town just over the river/border from Emerald Gardens. He also happened to be driving there the very day I needed to leave! I have only ever experienced magic at this level when certain plants are involved. So it was that we cruised across the Kupa River together and he gave me the grand tour of Metlika and even took me up the hill to Krašnji Vrh, the very tiny village from which came my great grandfather. I spent a lovely couple of days in Metlika before moving on to meet up with eighteen members of my American family in Slovakia, where we had just the loveliest of times meeting cousins we never knew we had, and I saw many of the same Plantcestors there too. (No Wood Betony, but lots of the others aforementioned)….and I will be back!

Home has a whole new meaning to me now, but I will always know who’s got my back……… 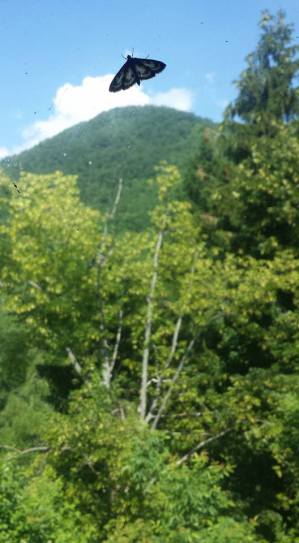